Historical evidences prove that saffron was introduced in human life more than 3500 years ago.There are different believes about where was the first nation cultivation it but, the most scientists argue that it was Central of Asia while others point out Iran Or Greece. With all this type of arguments between scientists all of the compromise on this fact that it was most costly herbal and in a lot of nations it been called “Red Gold”.

Saffron found its place in art too, you can see the trace of it in ancient painting or you can find it in old Iranian poems. In all of these documents, artists treated like glamorous items in their lives. you can see Greek painter drew pretty girl cure her injured feel by saffron or Iranian poetry offered to his love his heart and the bowl of saffron to lure her lover.

Cleopatra of late Ptolemaic Egypt used a quarter-cup of saffron in her warm baths, as she prized its coloring and cosmetic properties. She used it before encounters with men, trusting that saffron would render lovemaking yet more pleasurable.

Egyptian healers used saffron as a valuable herbal remedy, to any gastrointestinal ailments and also it has been used against the impotence of senior citizens also, they prepare ointment of it and used against bleeding parts or burn organs.

In ancient Greek and Room they used in different ways, they wore saffron as perfume and deodorant. the spread of public environments such as courts or royal halls. Nero ordered that when he marsh in the street they should spear saffron along the street. wealthy Romans took a bath with milk and saffron they believe that it could improve their immunity against illnesses. also, they had been adding saffron to their red win to protect from headaches.

In ancient Persia, it belonged to the royal families. Apart from remedy and treatment used, they had been used saffron in the royal carpet beside gold thread. in this part of the world, people added saffron to the food and tea. 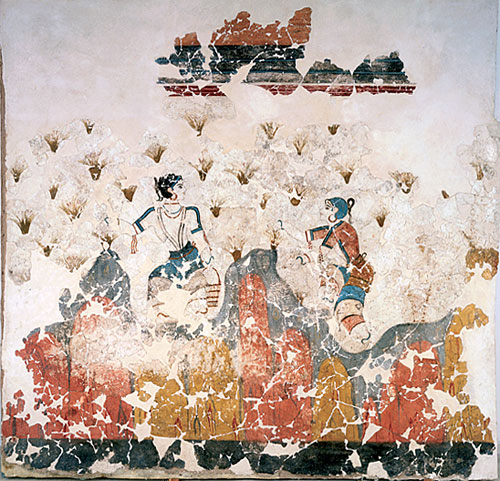 Saffron crocus flowers, represented as small red tufts, are gathered by two women in a fragmentary Minoan fresco from the excavation of Akrotiri on the Aegean island of Santorini. 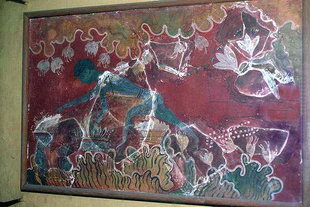 This inaccurate reconstruction of a Minoan fresco from Knossos in Crete depicts a man, which should be a monkey, gathering the crocus harvest.
Close Menu